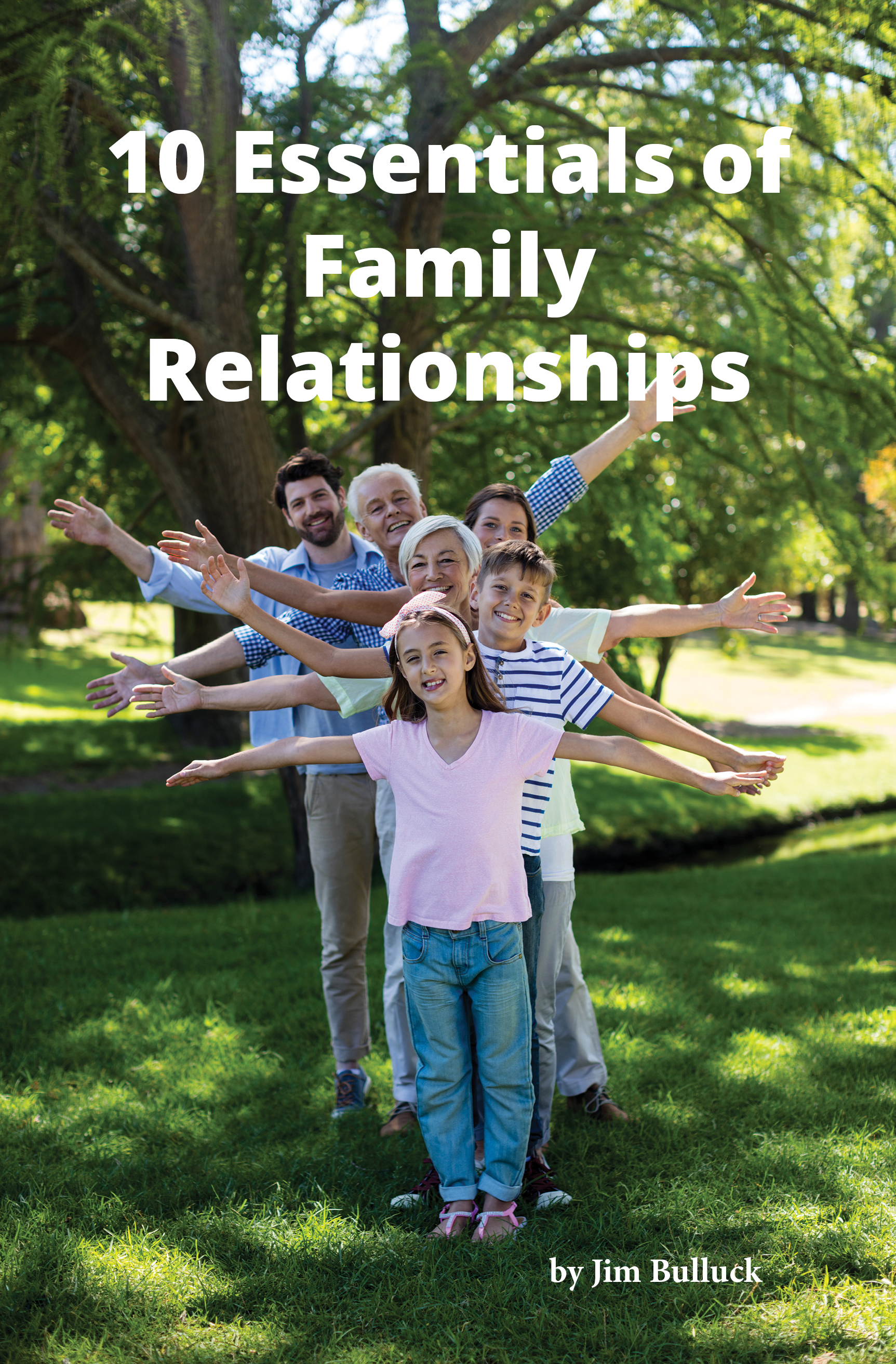 Jim has worked with families for over 40 years and this book is a compilation of things he has learned and desires to share with you.

It seems that everything I have been through so far in my life has led to the writing of this booklet. I have kicked against the thorns as they came just as hard as anybody. Thankfully, God did not quit prodding me.

My life has been an experience of being blessed in relationships. I have been trained, taught, shown by example, scared, and even spoken to by God to get into my heart the things that are revealed here.

Peggy, my wife of 56 years frequently reminds me of my penchant for speaking too succinctly. I will do so here, but I trust God will have His way into your heart with what I have to share.

This word was given to me on a little get-away with Peggy. You know those weekend trips that are so beneficial that you promise each other to go more often, but never do. We went to the mountains of North Carolina to rest. We left too late in the day because I would not leave the office and as a result, we arrived in Brevard, NC late in the day. So late that there was no room in the inn, no pun intended. We really could not find a motel room. We waited around and finally the kind inn-keeper said he had received a cancellation and we could have the last room in town. It was after 8:00 P.M. when we unpacked and started thinking about dinner. We were dog tired, after working half a day and then driving 8 hours up the mountains.

We found a small family owned Italian restaurant close to the motel and decided to give it a try. It was very busy and seemed to have a friendly atmosphere. We were seated in a small room with about six tables in it. There was a chest high wall separating it from the rest of the patrons. Two of the tables had been pushed together at one end of our room for a party of two families and their children. There were five children in the group, all of which were between six and ten years of age, I judged. We were seated at the table nearest them with my back to them. They had already ordered and were waiting for their orders. We place our order and the fun began.

The two sets of parents were oblivious to what their little darlings were doing, and what they were doing would have astounded you. I have never been known as a patient man; Peggy reminds me of this in situations like this. She started “helping” me as I repeatedly turned in my seat to show my displeasure at the yelling and dancing the children were doing just behind me. The other customers were beginning to look at each other and shake their heads in disgust at the spectacle these kids were making of themselves. Did I mention how tired we were?

Our food arrived and I was ravenous, but for the first time I can remember, I could not eat due to the commotion behind me. I was getting hotter and Peggy was getting more and more worried about what I might do. It took my asking her three times and the waitress’s unsolicited offer to move us, for Peggy to agree.

Mercifully we were moved, dinner and all across the hall to another table in another room. The commotion was still audible but we were able to finally eat and start thinking about bed.

All in all, I was proud of myself for not saying something to the parents. Truthfully, it was due to Peggy’s influence that I abstained. I thought the incident was behind me until 4:00 A.M. the next morning. I awoke from a startling dream. I thought it was the spicy food and tried to go back to sleep. I dreamed I was in the airport waiting for a flight. A few feet away was a young family with a small child. The child was in total control of the family and was screaming for something that the parents did not want him to have. It was a terrible scene. In my dream, I went over to them as if urged by Jesus and asked if I could talk with them. They were amazingly open to a stranger speaking into their situation. I think they would have taken any help to improve their control.

What followed was a monologue of ten things that they needed to do to turn their family around. As I awoke in a start, I remembered all ten items as if they were written on my heart. Did I mention how tired I was? I told God that I was just not able to get up and deal with this now. “If you want me to have this for some purpose, please give it to me when I am physically able to respond.”

When I awoke later in the morning I told Peggy about the dream and the conversation afterward. Nothing more was said until mid afternoon when we reached our destination for the week-end. After unpacking, we went out on the deck attached to our room to read and relax. I brought a pad and pen and asked God if He still wanted me to have the ten things He had given me the night before. I began to write and the Ten Essentials of Family Relationships were laid out for me in the order they had occurred in the dream, word for word, as I had heard them 12 hours earlier.

Upon returning to Savannah, I explained all of this to my pastor, Douglas Patterson. He asked me to teach the adult Sunday school class these principles. The fifteen weeks of sharing with them have resulted in this book. My prayer is that you will read and study it with your family and let’s together began to re-build the family, according to God’s plan.